If you’ve got six months – and nerves of steel – here’s some good news: You have a 61% percent chance of getting your medical device approved by the FDA. That’s one nugget of interesting data to be found in a recent Emergo group report that analyzed some 15,000 device clearances between January 2010 and December 2014. The Emergo group report shows that the FDA 510(k) approval process averages over six months.

We’ve blogged about this quite a lot over the past four years or so, and it looks to be another case of the more things change the more they stay the same. Back in June 2011, we reported on an Emergo study which found that in 2006 it took about 96 days to get clearance. By 2010 that number had leaped to 132. Today, Emergo reports that “it now averages about six months.” Blame for this trend is slung around between industry and regulators – each time FDA says it’s made a big step forward, the industry tends to toss these kinds of stats back in the agency’s face. 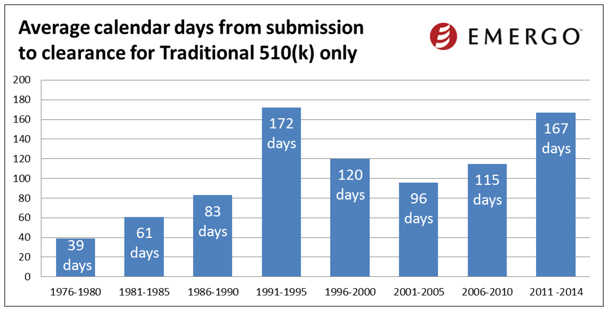 Radiological and Orthopedic devices are usually the fleetest of a foot in the race for approval, averaging about 140 days last year, that’s up from 135 in 2013. Overall, about 22% of devices are cleared within three months.

The study also finds that third-party reviewers tend to work more quickly than internal agency reviewers. While not all devices qualify for this program, think about grabbing it if you can. Your device might clear in 68 days, on average, or more than 110 days faster than with an internal FDA reviewer.

So, still trying to figure out how your new medical device might fare in today’s FDA climate?

A fun new tool from Emergo just might sweep aside some of the fog. Simply plugin (or lookup) your device product code, then sit back and let the tool tell you an estimate approval time based on similar products that have gone through – and survived – the process.