The FDA released 225 warning letters in the first half of the year. AssurX, a QMS software provider, provides a quick snapshot detailing the FDA’s activity. 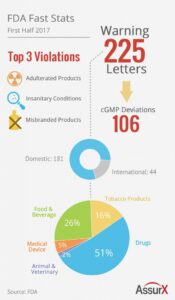 In the calendar year 2016, the overall number of quality management system surveillance inspections by the FDA was slightly higher. Certain citation patterns are certainly emerging in 2017.  Will the 80/20 warning letter breakdown between domestic and international manufacturers continue for the rest of 2017?